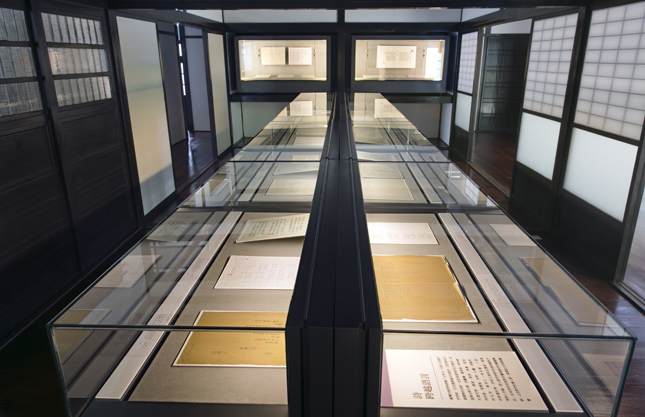 Origin of the Exhibition

This exhibition is divided into “The Beauty of Taiwan Traditional Poetry,” “Poetry Across Languages,” “Poetry Without Borders,” “Formosa, a Taiwan Poetry Suite,” as well as a “Zhou Mengdie Memorial Exhibit.” These five divisions give an aesthetic perception of poetry as physically written down on paper and the charm of the writing of different languages, as well as artistic creativity as writers move between different literary genres. This diverse exhibition shows the simplicity, depth and meaning found in “Poems by Hand” and with the aid of sound and images of a documentary film, the audience is led into the inner world of the poets as it reads between the lines.

The Beauty of Taiwan Classical Poetry

Taiwan classical literature began at the end of Dutch colonial rule with the arrival in Taiwan of Shen Guangwen. Dating from then on throughout the Koxinga period, Manchu rule, Japanese colonial rule and the postwar period there were, and continue to be today, many enthusiasts who write, recite, and appreciate classical literature. In addition to a handwritten manuscript by Hong Qisheng, ranked as one of eight National-level Significant Antiquities held by the Museum, important manuscripts of Taiwan classical literature in this exhibition include works of the Japanese colonial period by Lin Youchun and Lai Ho, as well as works spanning and covering the postwar period by Zhou Dingshan and Huang Chunqing. Classical writers not only had a solid foundation in Classical literature but they had received extensive and serious training in the art of calligraphy. The “beauty” of their calligraphy and its meaning is there for all to see.

There is a great diversity among Taiwan ethnic groups and languages, and when poets create they frequently select the appropriate language. Perhaps it is the mother tongue, with which the poet is most familiar, perhaps it is the contemporary official language. This exhibition features manuscripts by Guo Shuitan, Wu Yingtao, Chen Xiuxi, Lin Hengtai and Dupan Fangge, Jin Lian, Guan Guan, Shang Qin, Ya Hsien, Lin Zongyuan, Zhen Guihai, Lin Fan, Bai Ling, Li Qinan, Li Yufang, Chen Mingren, Lin Yangming, Bukun • Ismahasan • Islituan, and Walis Nokan. Although the languages used are different, what the poets do share is a seriousness about their artistic creations and a deep concern for society and native place.

Among the writers of this section of the exhibition it is Wu Yongfu who suddenly appeared on the literary horizon with his fiction but who later focused a great deal on haiku, Taiwanese vernacular poetry and Chinese poetry. Wang Changxiong was famous as a fiction writer during the Japanese colonial period and his poem“Open Wide the Window and Gate of My Heart” was widely circulated. Chi Chun was known for his nostalgic essays and fiction but her short poems were also elegant and endearing. Yu Kwang-Chung once said he wrote “poetry with his right hand” and wrote essays “with his left hand.”He could also translate and write criticism. Yang Mu was celebrated in literary circles for his poetry yet was also accomplished in prose and criticism. Lin Zhonglong and Zhang Dachun were all-around writers with remarkable successes in both fiction and prose. Both Li Kuixian and Xi Murong were famous for their poetry, while their criticism and prose were by no means inferior.

The native soil has always provided the most essential “nutrients” for poets as they create. Portuguese sailors praised Taiwan as the Ilha Formosa, or “Beautiful Isle,” and the island’s abundant produce and beautiful landscape have long been objects of the poet’s pen. The manuscripts in this area of the exhibition go from nature to topics inspired by human life, from extolling the soil to heartfelt thoughts of home. Everywhere the deep feeling and loving care for the Taiwan soil find embodiment in the works of these poets. From Luo Fu, Rong Zi, Luo Men, Zhang Mo, Yan Shang, Lin Huanzhang, Wu Sheng, Li Minyong, Xiao Xiao, Chen Yizhi, Chen Li, and Xiang Yang, all compose together a Taiwan Suite in verse.

The cold here is like alcohol, it hides poetry and beauty.

Even in this world of illusion, I speak with my hands and invite the myriad stars of Heaven who have forgotten how to speak.

The past has stopped, the future has not arrived.

I am the servant of the “now,” and also its Emperor.

Zhoe Mengdie, king of the Lonely Country, passed away on May 1, 2014, in the Taipei Tzu Chi General Hospital at the age of 94. This Memorial Exhibit puts on display poetry manuscripts donated to the National Museum of Taiwan Literature by the poet while he was alive, as well as manuscripts on loan for the exhibit written by his poet friends. The poet Zheng Chouyu specifically wrote some new poetry for Zhou, comparing his noble character and poetic style to that of the famous poets Sima Xiangru and Yang Xiong. This exhibit gives viewers a chance to carefully savor the poet of a generation, Zhou Mengdie, through handwritten manuscripts and the poet himself.

Huang Mingchuan directed the shooting of a group portrait of Taiwan poets and through interviews, readings, and digitally recorded sights and sounds, the poets’ images, sounds, and works are combined to sketch an outline of Taiwan poets so viewers get a personal and direct introduction to their elegant style through film.