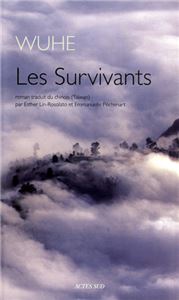 Chen Kuo-cheng, born in 1951 and known by his pen name Wu He, is often considered as “odd” in Taiwanese literary circle. Wu He once retreated himself in Danshui, reading a great quantity of books for 10 years. After his retreat Wu He published several books including The bone collector and Remains of Life. The background of Remains of Life is the “Musha incident” which took place in 1931 at Nantou, Taiwan. During the winters of 1997 and 1998, Wu He stayed at Qingliu village, where it was called Chuanzhongdao, to live with survivors from “Musha incident” and compose his book Remains of Life. Wu He once said there are three purposes of writing Remains of Life. First, it is to search for the legitimacy and justness of “Musha incident”. Second, it reveals a girl’s journey in search of ancestral spirits. Third, it describes the survivors and their remains of life when Wu He was conducting research in the village. There is only one long paragraph in Remains of Life, which is also Wu He’s very first French edition published in June, 2011.